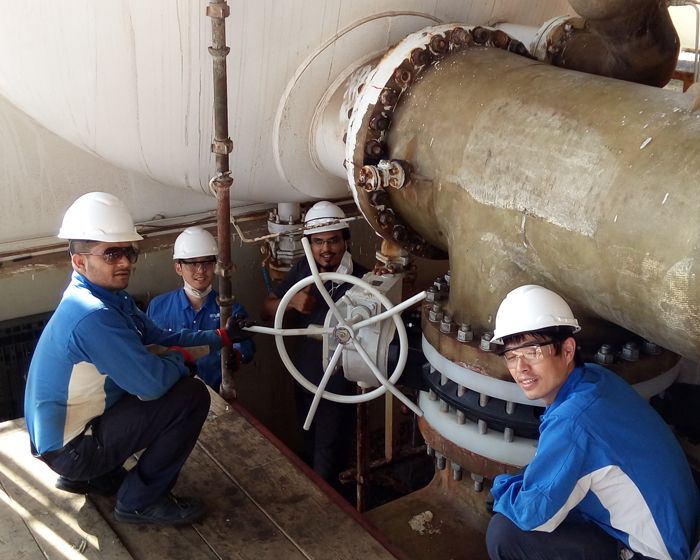 The body material of existing valve is “A216 WCB Carbon steel” with rubber lining. Rubber lining was deteriorated and detaches, causing the body of the valve to get in contact with the fluid. This causes the process of corrosion to initiate at high rate causing Valve Body leakage.

Due to intense rate of leakage the pumps working to fulfill the required quantity have to overdo thereby increasing the power consumption of the plant.

Valves were badly damaged hence refurbishing and acquiring new spares was an expensive option. Client requested to utilize the old actuators and gearbox with new valve. Various tests were to be conducted before giving any statement as it was not certain whether the old accessories were compatible with our valves. Incompatibility would cost client an expensive replacement, which was not an option.

The continuous seawater on ground started affecting the building infrastructure of the areas. The leakage point was from the neck of the valve mostly, thus damaging the gearbox along with actuators. Couple of gearbox were so badly damaged that they were not been able to refurbish and had to replace them with the new once. The isolation for servicing or other job of the DMF filters was not possible due to internal leakage through valve.

The process of corrosion won’t stop at any given point as body material of the valve is carbon steel which has a poor resistance to seawater when in contact. Without a reliable solution, the plant risked process instability and potential future shutdown.

Hence the proposed replacement had the following features listed to overcome the challenges: